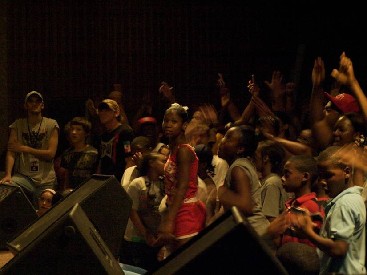 2012 caps our celebration of 10+ years of ministry for Abandon Productions.  God has used hundreds of events we have planned, promoted, and produced to reach and impact thousands with the Gospel of Jesus Christ.  Here’s a glimpse of the 10 selections of events God used to impact the Greater New Orleans and Gulf South region:

U-NITE AT THE HIVE (2010) – We have partnered for many years with the New Orleans Hornets as part of NOYMN to produce a faith and family night outreach called U-Nite At The Hive.  The highlight included the Gospel impacting over 15,000 in New Orleans arena and 2,000 in post game concert featuring Seventh Day Slumber and Corey Hicks.

RESTORATION FEST (2008) – In the years following Hurricane Katrina’s destruction on New Orleans we served through an initiative called Restoration: New Orleans.  This movement was highlighted by a festival featuring Flame, Jake Smith, Corey Hicks, Chase McCloud, Tara Alexander, and others in Central City New Orleans.  Other smaller fests were held in Upper 9th Ward and Westbank as part of Crossover 2008.

ALL GLORY AND HONOR: A NIGHT OF PRAISE (2004) – In the early days of Abandon Productions we hosted a night of praise featuring Undone and Widow’s Mite which gathered students, adults, and collegiates from Southeastern LA University.

GLORY IN THE HIGHEST (2010) – A special night to kick of the Christmas season headlined by Chris Tomlin and Christy Nockels featuring a powerful message from Louie Giglio.  Close to 2,000 people joined us for the special event produced with our friends Awakening Events in Metairie, LA.

INFUSION – THE ALTERED MINDS TOUR (2009) – We hosted an urban missions initiative called Infusion which featured a conference and 2 concerts.  One of the concerts drew over 1,000 in Hattiesburg, MS, featuring Lecrae, After Edmund, Sho Baraka, and Mikeschair.

ABANDON AT THE HARD ROCK (2009) – We kicked off our first in a series of shows with the Hard Rock Cafe of New Orleans with a special Christmas show headlined by Chase McCloud giving us an opportunity the spread God’s love and worship in the historic French Quarter.

ABANDON TOUR (2010) – For years we have produced a series of events called Abandon Tour featuring concerts and evangelistic outreach across the Gulf South.  One stop was highlighted with the rock band Disciple as we packed an old church in Metairie, LA, with teens to hear the Gospel.  Our founder Dean Ross eventually started a new work called Lakeside Church in this very location in addition to developing the multipurpose venue Lakeside NOLA.

It really is hard to pick just 10 events to highlight, but we praise God for all He’s done and He continues to do through this ministry!  The best is yet to come.  You can support the ministry of Abandon Productions by visiting PARTNER WITH ABANDON link accessed via http://www.abandonthemovement.com or http://www.abandonproductions.org